This page will be used to present new material as it relates to our Mission: Educating Americans on their Christian Heritage. Hopefully, we can do this monthly.

The following items may require a little effort on your part. In many cases, we are only providing a link to the information of another source. You will have to look at each link/source and, hopefully, walk away more informed than before. It is our hope you will realize and pass onto others, the importance of Christianity in America. We don't want to be world-wide missionaries. There are other organizations doing that. We just want to help save America! The only way to do that is to get fellow Americans to realize the importance of Christianity in the founding of our Nation. Every generation since WWII has lost some of this realization; to the point that today, America has departed from Christian principles and is now paying the price. Some say it is too late to turn America around. We don't know! We just have to try. God wants it, America needs it.

ITEM # 2: A discussion on the definition of Religion/Church, as it relates to Separation of Church and State". There has been a huge misinterpretation of this phrase. Probably the most important issue as it relates to what needs to be done to Save America!

It all started with a letter from the Danbury Baptist Association of Danbury, Connecticut to the then third President of the USA, Thomas Jefferson. Back in 1801, what Danbury Baptists and Jefferson were talking about was Christian "denominations", when they used the term "Religion". The Baptists were worried about other Protestant and Catholic denominations. Back then, there was little worry about Islam, Judaism, Hinduism, or Buddhism.

It was meant that the new United States of America would not endorse or promote any particular Christian denomination: (Baptist, Methodist, Presbyterian, Catholic, Lutheran, Church of Christ, etc.) Other Religions (Islam, etc.) were not part of the equation.

Bottom Line: "Separation of Church and State" does NOT mean we cannot not be a Christian Nation! Our Leaders just need to do their homework!

Maybe, if you care enough about your Country (and your religion) you can help in our cause. If you are a leader, you know what to do. If you prefer suggestions: maybe contacting your state/federal representatives would be a good idea.

ITEM 3: AUG 2016
THIS IS THE MOST IMPORTANT ISSUE TO UNDERSTAND:

SEPARATION OF CHURCH AND STATE

Our Founding Fathers came from England. That religion was Christian! Founding Fathers may or may not have been aware of the other Religions in the World at the time, but Christianity is all they knew.
The point is; coming from a country where Christianity was THE RELIGION; and other religions like Islam, Buddhism, Hinduism, and Judaism were not even considered when writing the Declaration of Independence, or later, The Constitution of the USA.
Any true scholar of American history can tell you: the word "Religion" at the time of our Independence was: Catholicism, Protestantism, Lutheranism, Anglicanism, Presbyterianism, Congregationalism, Methodism, Baptist Churches, Pentecostalism, Adventism and a few other lesser denominations: ALL CHRISTIAN!

Islam, or any other religion was not part of the Founding Fathers thoughts. Jefferson's letter to the Baptists proves that. He was telling the Baptists not to worry; America would not sponsor any particular "religion". Meaning any Christian religion would be okay, just not a particular denomination of Christianity.

The term "Separation of Church and State" is NOT in our Declaration of Independence OR the original Constitution!!! It just evolved from misinterpretations and other political shenanigans. The rest is History.

We need to get back on track!

Since our 2016 national Presidential election is just around the corner; it is only prudent to keep in mind our Founding Father's position concerning the selection of our national leaders. One of the best examples comes from John Jay, the first American Supreme Court Chief Justice and co-author of the Federalist Papers. He said "... it is our duty, as well as the privilege and interest of our Christian nation to select and prefer Christians for their rulers."

This site promotes no particular candidate. We look for the candidate(s) who best mirror what our Founding Fathers would support. In short, their position would be to look at how well the candidates adhere to the Constitution AND the Bible.

Often, when we have deviated from this position, our Nation has suffered. The cumulative effect of these deviations over the generations have led us to where we are now. Millions of Americans are satisfied with where America is now, other millions are NOT! This brand new site represents the latter. If you are still reading this, you must have at least some concern for your country. We offer this platform as a way to get involved to whatever extent you wish.

"MIND CONTROL":   We learn by listening and watching!  Much like a child before adulthood.

What we listen to and watch,  determines how we think and evaluate things.  What each of us has been exposed to during our life has determined how we now think.

In my humble opinion, the most important thing humans can learn is "Religion".  Second, "Country Allegiance".   The choices we make in life should be based on our religion first,  and our country second.  Our families automatically will be taken care of, if we choose correctly.

If we only subscribe to one Channel of thought, (TV/Radio and other media) we will become blind servants of that particular philosophy.

While searching Snoops, FactCheck, Wikipedia, etc.  I learned to look at multiple sources for actual facts.  Especially on important issues.

Because of this, I have chosen to watch CNN and FOX NEWS an equal amount of time.  It is painful at times (while listening to opposing views), when my upbringing collides with what a particular media is promoting.  But we owe it to ourselves, to be FULLY armed with facts as best we can.

EXAMPLE:  The extreme Political networks are CNN and FOX.  Others like ABC, CBS, and NBC are still part of the equation.  CNN is obviously supporting the Democrats, and FOX is supporting the Republicans.  It makes me sick that both Networks have their Agenda.  If there is  a NEUTRAL news network out there, most of us would love to know.    Barbie and I travel a lot on the road,  We can tell by the content of the program what satellite news channel we are on.  THAT'S A   SHAME!!!

It all comes back to "MIND CONTROL" .

Unless you are open minded, and listen to BOTH sides; and THEN compare that to what is closest to what God would want, you are doing yourself and your country a disservice.

Jesus is the Reason for the Season.

But let us not forget our Jewish friends.  Happy Hanukkah!

The USA was founded on “Judeo – Christian values”.  More on this later.

We at GodandCountry wish you well in the upcoming year.

A foundational concept in the development of America we appear to ignore:

John Jay (First Chief Justice of the Supreme Court of the USA) said: "it is the duty as well as the privilege and interest of our Christian nation, to select and prefer Christians for their leaders".

Wow! The Chief Justice, back when we were first founded called us a "Christian Nation". A recent President proclaimed that "...we are no longer a Christian nation ..." It's sad; and dangerous to our country to allow this degeneration of our moral fiber, and our past culture, that has up till now, served us so well.

There have been many Presidents, Governors, Congressmen, etc., etc, in the past, (and present) but only one Chief Justice of the Supreme Court involved with the once in a lifetime event of forming a Country that would rise to the greatest Nation on earth, and then later start it's decline. We would do well to follow his advice.

How about this as an improvement over Donald's hat?  What do you think? 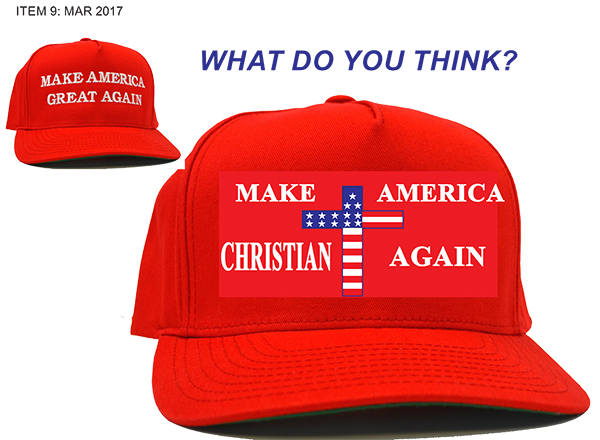 DISCRIMINATION IS NOT A BAD WORD!

BACK IN THE DAY:  1951 Webster's Dictionary definition: "to recognize as being different, tell the difference between".

TODAY:  Google  "discrimination definition" and you get: "the unjust or prejudicial treatment of different categories of people or things, especially on the grounds of race, age or sex.

How did we get to this total difference?  In two letters, "PC".  Politics has, over the years, changed the definition.

We all discriminate every day.  (in a good way).

Somehow "Discrimination" is now a '"bad" word.  We all need to think about how that happened!

THEN: we need to think about HOW to turn that around!!!

WallBuilders is an organization dedicated to presenting America's forgotten history and heroes, with an emphasis on the moral, religious, and constitutional foundation on which America was built – a foundation which, in recent years, has been seriously attacked and undermined.

AHEF is a non-profit, non-partisan educational group dedicated to the understanding and teaching of America's factual and philosophical heritage to promote constructive citizenship and Freedom, Unity, Progress, and Responsibility among our students and citizens.